Woman Suffers Horrible Burns After Brushing Up Against This Plant

Hemlock, hogweed, parsnip, and a pinch of lace – don’t these sound like poisonous things that belong in a witch’s cauldron? Well, they are all poisonous plants that happen to resemble each other, but it’s wild parsnip that is prompting warnings right now.

A woman in Vermont learned she had a brush with the unassuming-looking plant after a rash popped up on her body. Charlotte Murphy made a quick roadside stop while she and her boss were traveling. Everything looked clear in the area where picnic tables and restrooms were set up, but she slipped and stumbled into some wild parsnip.

She was familiar with the plant but didn’t realize her leg bumped into broken leaves, thus exposing her skin to the oils in them. Little, non-itchy bumps appeared days after her encounter, but she carried on with her daily routine until about a week later. That when things took a terrible turn.

If you’re not familiar with wild parsnip, it’s a weedy plant that can grow over five feet tall and looks similar to hogweed and Queen Anne’s lace. Its sap causes reactions that have been compared to second-degree chemical burns.

It is an invasive species typically found in fields, yards, and roadsides throughout the US and Canada. Where it gets tricky is that the sap/oil in the plant are triggered by UV light exposure.

That means sunlight activates the oils, damaging the skin like severe sunburn with blistering, redness, discoloration, and burning. During the summer months, the plant flowers with a yellow, umbrella-shaped cluster and it’s usually the period where’s it most dangerous.

WARNING: THE PHOTOS BELOW ARE GRAPHIC.

Murphy’s rash spread, turning into painful, yellow blisters on her leg. She shared details of her experience on Facebook with graphic pictures of what happened to her skin:

“I didn’t realize my leg had been rubbed against it’s broken leaves when I slid into the brush so I went about my day in the hot sun, thus activating the plant oil even more, which causes the skin to be further exposed to the power of the sun. A few bumps appeared within a couple days but no pain or itch. I continued working out in the sun allowing more sweat and UV rays to hit the skin, making the reaction that came a week later much worse than if I had washed my skin right away and stayed out of the sun. A week later redness increased and the itch began. Unfortunately I scratched it a lot in my sleep and woke up with blisters on my leg. Throughout the day they grew exponentially to a point where my leg was swollen and I couldn’t walk. I rushed to Fanny Allen Urgent Care and have been going each day for inspection and bandaging as it spread to my other leg, arms, and fingers.” 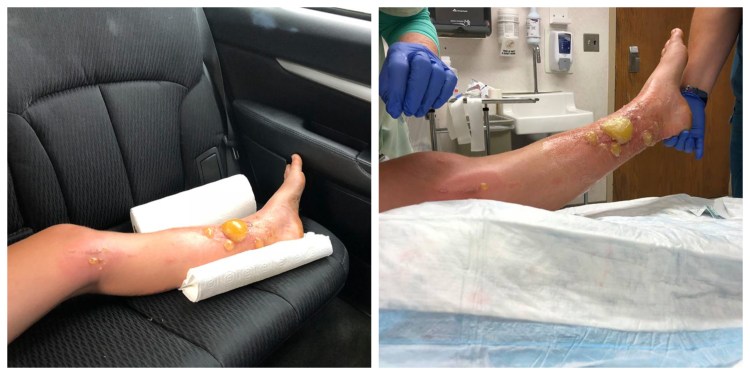 Murphy is on track to make a full recovery, but she also warned people to watch out for their pets when outdoors. Experts warn that burns like Murphy’s are common with wild parsnip and advise people to wash their skin as soon as possible after coming into contact with it.

Be careful when cutting or mowing it down and see a doctor immediately if your skin has touched the sap while outdoors. Remember, heat and sunlight will activate the compounds in the sap.

Were you aware of wild parsnip’s potency? Have you suffered burns from a poisonous plant like wild parsnip? What type of reaction did you have?