When This Normal Couple Left a London Hospital with Their Newborn, They Accidentally Stepped into the Royal Baby’s Spotlight

By now, you’ve probably heard the exciting news: Duchess of Cambridge Kate Middleton has given birth to her third child, Louis Arthur Charles.

Louis was delivered at 11 a.m. on April 23, 2018 in the Lindo Wing of St. Mary’s Hospital in Paddington, weighing in at 8 pounds 7 ounces. He’s already home and doing quite well in his royal abode with his parents, older brother Prince George and older sister Princess Charlotte, who all love him very much. The Lindo Wing is actually where George and Charlotte, and other royal babies, were born as well.

It’s a pretty luxurious hospital wing—in fact, the cheapest room comes in at £5,215 a night (around $7,325), and suites, which cost around £10,000 a night ($14,0445), are only available after applying for them. We won’t even tell you how the wing offers waiters to take your order, chefs to cook the meal, champagne, wine, afternoon tea— not to mention the comfiest of arm chairs and soda beds!

While the wing is pretty luxurious, it’s not forbidden from common folk, and Kate wasn’t the only one to walk through it on the day she was leaving the hospital. While camera crews, fans, journalists and more waited outside the wing ready to snap a photo of little Louis, a different, unexpected couple emerged before Kate and Will.

This seemingly “normal” couple, who were leaving the hospital with their newborn right before Kate and husband Prince William stepped out with theirs, were in awe of their unplanned “welcome” of by a big crowd and hoards of reporters. 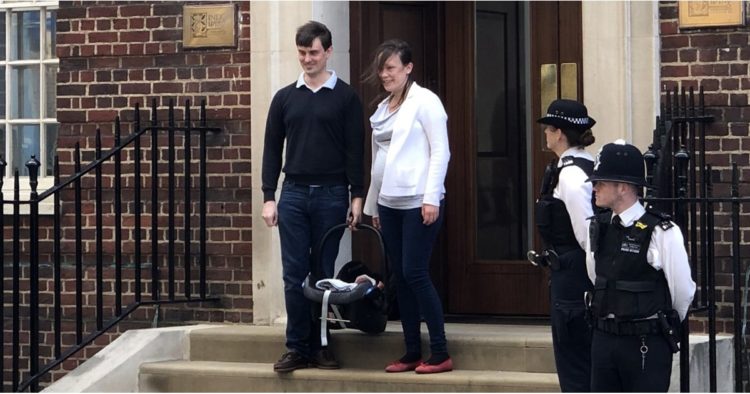 Can you imagine: Leaving the hospital, probably with a million and one thoughts – probably thinking of where to stop for some pacifiers or diapers, how their pet dog will react to a newborn, or how they’re ever going to sleep again – and suddenly you have hundreds of news crowds with cameras flashing your photo?

What would you do in that situation? Would you have fun with it? Because that’s just what this couple did. Not only did they keep their cool, but they played up the situation as much as they could in the most hilarious way.

First off, the couple barely even looked shocked when they walked out of the wing. Instead, they began asking for retakes of the photos as they jokingly began to adjust their appearance to make themselves as camera ready as possible. The father even reportedly took his own photo of the crowd of reporters so that he could remember the crazy moment. (We’d do the same!)

The new parents weren’t the only ones joking about the situation. Even Netflix got in on the fun and tweeted about the incident, comparing it to a popular TV show. To find out what it was, as well as more on how this funny couple reacted to their new stardom, check out the video below!

What would you do if you gave birth right before the royal couple did and then got caught in all the action that followed? What do you think of this couple’s reaction to the cameras? Would you milk it the way they did?