It’s already not an easy job being a mom—but being a mom, running a race, and stopping to pump breast milk? That’s what we call a mega-super-hero mom.

Meet Jasmin Paris, the 35-year-old British veterinarian (and ultra-marathon runner) from Scotland who is putting all other runners to shame. Not only did she just become the first woman to win the Montane Spine Race, a 268-mile nonstop race, she made multiple stops along the way to the finish line to pump.

Even with all her stops, she completed the race along England’s Pennine Way in 83 hours, 12 minutes, and 23 seconds, which was still 10 miles ahead of the person who placed in second. That’s 12 hours better than the previous record!

Though Jasmin had previously frozen her breast milk for her 14-month-old daughter Rowan, she still had to pump in order to prevent getting mastitis, a painful inflammation of the breast tissue.

“I had to express during the race so it didn’t get uncomfortable,” Jasmin said. “At the first checkpoint, it slowed me down a lot and I had to hurry afterwards to catch back up.” As the race progressed she produced less milk, so the expressing became quicker. “In the end,” she says, “it was less of a problem than I’d feared.”

So what did she have to say for herself once she crossed the finish line? “That was hard,” she said when she reached the end.

The thing is, it doesn’t seem like Jasmin ever really feels like her runs are that hard—she’s trained for them for a long time, and always comes out feeling on top of the world. Even when she was pregnant, she was still able to train. 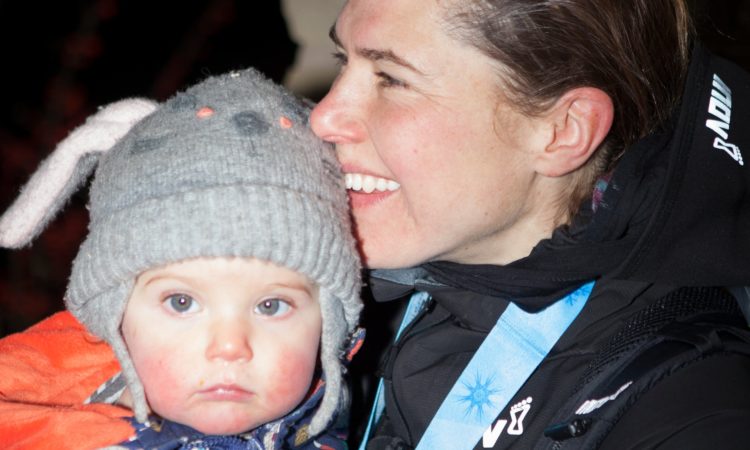 “I had a straightforward pregnancy and was able to carry on running until the day my daughter was born,” she said. “I had no major trauma following childbirth and I have a very supportive family, in particular my husband and parents, who make it possible for me to get out running and racing on a regular basis.”

When she did start running again after the birth of her daughter, that’s when she discovered that it was going to be a long road to get where she used to be.

“I found it hard coming back to running form,” she said. “When I first started training again it was a bit of a shock to discover how unfit I’d become, friends I’d run with comfortably in the past now seemed impossibly fast.”

She eventually overdid it and endured a tendon injury that kept her out of the gym for two months. Once she was recovered, she still found challenges between finding time to train and caring for her little one, so she’d train during early hours. “It wasn’t easy,” she said.

Funny that that’s pretty much what she said at the finish line! If it were easy, we’d all be dong it, right?

We can’t believe the determination Jasmin had to win this race, and still stop to pump! What a super mom and runner!

What do you think of Jasmin’s story? Could you ever run a race like this?