It seems like these days everyone has their own opinion about breastfeeding. Whether it’s that you’re super anti-formula and you believe you have to breast feed in order for your child to grow up healthy, or you think that breast feeding in public is terrible, no matter what, it seems like moms get ridiculed for anything related to feeding their babies.

In the case of 35-year-old Leanne Allerton, this mom was ridiculed for breast feeding her daughter Poppy who’s a lot older than the average baby you’d typically breast feed. She’s actually not even a baby. She’s four years old—and still getting her milk supply directly from the source. In her video, Leanne also talked about how she breastfed her son Georgie until he was four as well.

The mom regularly vlogs about breastfeeding on her YouTube channel, and has lots of subscribers. One particular video has racked up over a million views, but not necessarily because of her fans. In fact, it seems she’s gained quite a bit of enemies over this one, which shows Poppy getting breast feed. The majority of people who saw it believe that Poppy is much too old to still be getting breast fed.

“How do you expect your child to grow and prosper socially when they are still relying on your boobs for sustenance?” someone angrily wrote.

“This isn’t natural. This is not wanting your child to grow up. It’s not necessary. It’s sickening honestly,” someone else commented.

So what’s Leanne’s reason for breastfeeding her daughter so long? “People say to me that Poppy relies on me too much but it is not about that,” she clarified. ‘It’s our time and it benefits her. It is just our routine and our life and it’s just the way it is.” 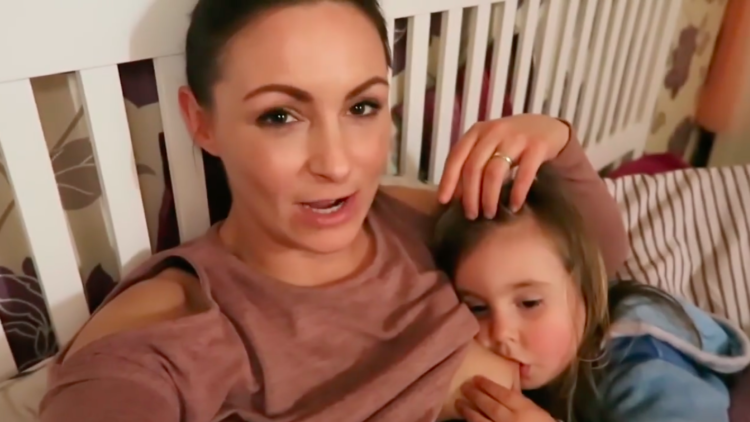 But that excuse still didn’t even settle some people.

“You can bond by holding and cuddling. I mean, imagine going to school and breastfeeding – he doesn’t need breast milk this old,” someone wrote in response to her reasoning.

“Mom should find another way to bond—she needs to accept she’s a child and not a baby—and let her be a kid,” another person stated.

That doesn’t mean it’s always been sunshine and roses for Leanne in terms of breast feeding. She’s had her share of dry milk spells and things of the sort, but she says she wouldn’t have it any other way.

Despite the haters, Leanne is proud of herself for coming as far as she has. “Now when I look back I realize it has been just over eight years that I have been breastfeeding,” Leanne said. “It’s quite a large chunk of time and I am quite proud of myself. I am happy that I have done it.”

To check out her vlog, which has actual footage of her breast feeding her four-year-old, check out the video below.

At what age do you feel it’s appropriate to breast feed until? How do you feel about Leanne breast feeding her daughter at age four? What did you think of her points in the video?