Tyson Steele, 30, was asleep in his cabin in the Alaskan wilderness one cold December night when a raging fire occurred suddenly and burned the entire dwelling down.

While he survived, the fire left him with no home, limited food, no phone, and even no dog—sadly, his furry friend Phil died in the fire.

The fire erupted after Steele put a large piece of cardboard into his wood stove fire. He didn’t know that the cardboard was actually sending sparks up his chimney, which made its way to his plastic roof and cause the cabin to go up in flames and collapse.

“It’s 1 or 2 in the morning, and I’d been awakened to a cold cabin, right?” Steele told the troopers. “…And drip, drip, drip—there’s fiery drips of plastic coming through the roof above me. So I go outside…and I just see that the whole roof’s on fire.”

And so began a 23-day span of a real-life Cast Away situation. The closest neighboring town was 20 miles away and his only way to get in or out was by air charter. So for those next more than three weeks, Steele found shelter in a snow cave, which was actually warmer than being strictly outside, only using a wood stove to heat up the minimal food he had.

“Snow caves are pretty nice for survival,” Steele explained. “There’s a lot of insulation. It can be negative 40 outside and if you have a candle—which I didn’t—but if you do, it can be above 30 degrees. But I just huddled into that dark cave and I slept. I slept for a really long time. And it was, it was warm. Warmer than outside.”

Even light was few and far between. “I had a headlamp for maybe 10 or 11 days, but I only had the batteries that were in there,” Steele said. “So, I ran out of light.” 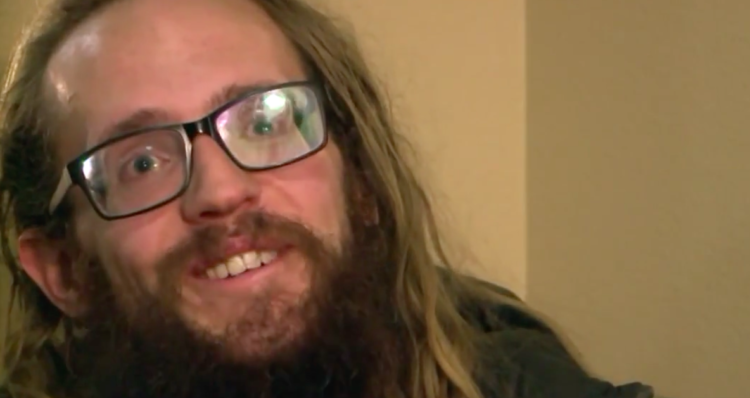 When he wasn’t sleeping, his time was spent simply trying to survive. He finally got the idea to wrote “SOS” in the snow, tracing the letters in ashes.

It was during a welfare check when members of the Alaska Department of Public Safety saw his cry for help and rescued him. He was transported by helicopter to the Alaska State Trooper’s Aircraft Section Hangar at Lake Hood.

“Steele’s shoulder-length hair, chestnut brown near the roots fading to golden blond near its frayed tips, hung matted and dreadlocks-like over his neck. His auburn beard flowed untrimmed to his chest,” Alaska State Trooper Ken Marsh stated. Yep, exactly like Cast Away.

The troopers immediately gave him access to a shower, and, more importantly, a McDonald’s Combo Meal #2, which was all Steele could think about.

“His clothes smelled of smoke and his hands were calloused, rough, and ash-stained,” Marsh continued “Nonetheless, he appeared healthy overall and energetic as he nursed a tall cup of McDonald’s coffee. He seemed happy to talk, and certainly to have survived 22 or 23 days in the wilderness.”

To hear from the survivor himself, check out the video below.

How crazy is this story? Can you believe Steele was able to survive for so long with such little means? What would you have done in his situation?