Need a way to kill some time today? We’ve got another game that’s good for training your brain. Your eyes will also appreciate a little torture when you peer into this optical illusion to find the hidden object.

Why? Because we love hunting for animals in either a sea of identical ones or inside of a giant one. You can shoot your shot with a traffic jam of Santa impostors and win, and you can outsmart a mob of jolly snowmen to find the panda, but finding extra animals is different.

Obviously, this is a picture of a frog. Right? He’s chilling in a bog, minding his business. I couldn’t figure out what the big deal was at first and victoriously claimed “I got it! There’s the frog.” But then realized I didn’t get it. So, I just stared at this for what felt like forever and still couldn’t find anything extra.

That is until I gave up and looked up the answer. Ohhhhhh! It will be all you see after that. Perception is everything with these puzzles and this is a mighty good example of it. Tell us: do you see another animal in this picture? Like other pictures within a picture, this one has stumped the internet. 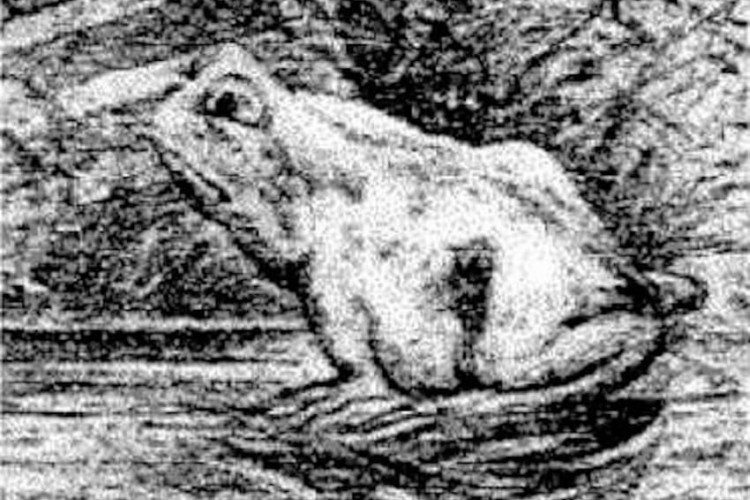 Buried within this big frog’s habitat is a horse. That’s right. A horse. Have you spotted it yet? If you look closely, you’ll see that it is smack dab in your face. Squinting will only get you so far, so here’s a hint: tilt your head sideways (or tilt your phone). See it now? Okay, it’s just a sketch of a large horse’s head but you’ve got to admit that this is very clever.

This drawing first made the rounds in 2006 thanks to the website “Mighty Optical Illusions” and it’s picked up a new life in recent months. It’s still a hard one to solve to many folks.

In order for the trickiness of images like these to work, your brain has to process what your eyes are taking in. Visual illusions play on what we think we see, and what we think we know. Thus, what we’re looking at initially is obvious (in our minds).

We see this a lot with visual illusions that make us think an object is moving but it really isn’t. There are also times when we just don’t see anything at all, like with this picture of a field. Or is it?

Now, you can go show this one to your family and friends and see if they can find the hidden animal. Some of the most interesting guesses will come from kids! A handful of them claim to see a bunny somewhere in this piece. Do you too?

Keep doing visual teasers like this to perk up your day and give your brain a quick tune-up. And hey, if you’re a gifted artist, perhaps you’ll be the next one to come up with the latest viral hidden object challenge. Why not?

How long did it take you to solve this hidden object puzzle? Would you consider this one easy or difficult?