This AT&T Advertisement is Absolutely Chilling

Deaths from texting and driving have become nothing short of an epidemic worldwide. This 21st century distraction causes 1.6 million crashes a year, that’s 1 in 4 crashes across the globe. Companies and organizations from hundreds of countries have rallied to raise awareness about the dangers of texting and driving, including cell phone providers like AT&T. While some companies go for informative ads, AT&T has a really masterful way of getting their point across — through hauntingly powerful commercials.

These ads, which are so realistic they could be a slice of your weekly life, seriously hit home for viewers. Beautifully written and beautifully shot, you know when you see these advertisements that they’re really going to be effective.

But none have been as chilling as this one.

In one of AT&T’s newest advertisements, titled “The Unseen,” begins with a doting dad who is driving his daughter and her friends to the local pool. The giggly girls are laughing and gossiping, dad even turns up the music when a particularly good song. The whole car seems to be having harmless fun — but wary watchers are probably concerned for the girls’ safety.

However, this shocking ad is not going to be as predictable as you might think.

Meanwhile, the man’s wife discovers that their family dog has gone missing. She finds a gate ajar in the backyard and begins to frantically call her husband. Despite her constant calls, the dad stays focused on the road, waiting until the girls are safely out of the car and at the pool to check his phone. He finally pulls over to answer the phone and tries to calm her about the missing dog. 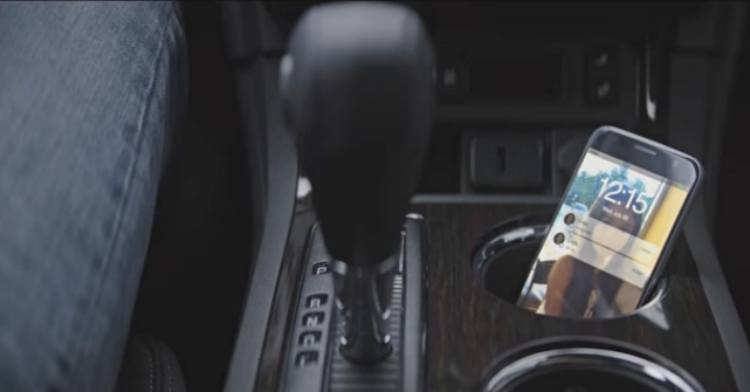 AT&T
When he starts the car back up, Dad is surprised to see a little boy, who he doesn’t know, suddenly in the backseat of his car — like he appeared out of thin air. Not going to lie, I jumped right out of my seat when he appeared.

Dad learns the boy is a friend of his daughter’s and he proceeds to give him a ride home. Realizing the phone keeps ringing, the boy asks the father if he’s going to answer it. Dad declines, saying he would never be so irresponsible as to answer the phone with a child in the car.

But that’s when things take a bizarre turn.

“It’s okay. I’m not here,” the boy says. By the time Dad turns around, the boy is gone. Even more chilling than when he appears, but this commercial is long from over.

The father tries to collect himself, maybe thinking he imagined the bizarre conversation, and glances down to see his wife has started calling him again, even sending him a text. Thinking that there was no child in the car anymore, the dad finally breaks and checks the text, looking away from the road for a long time.

Watch the end of the video below to see the final chilling twist of this advertisement.

What do you think of this powerful, unique PSA? Share your thoughts on the haunting ad in the comments section below.