Gary Sinise Treated Over 1,000 Children Of Fallen US Soldiers To A Disney World Trip

You probably know actor Gary Sinise from the hit ‘90s film Forest Gump. He played Lieutenant Dan, aka the man in a wheelchair who didn’t have any legs.

It might have been the character, or he might’ve always just had a kind heart, but Sinise, now 64 years old, has consistently campaigned for veteran rights for as long as we can remember. He’s participated in everything from helping wounded veterans rebuild their homes to volunteering for USO tours.

“While we can never do enough to show gratitude to our nation’s defenders, we can always do a little more,” Sinise has stated in the past.

Sinise’s kind streak doesn’t look it’s ending any time soon. In fact, he’s just done one of his most kindhearted gestures yet.

Through a program run by the Gary Sinise Foundation, more than 1,700 Gold Star family members able to take a trip to Disney World—for free.

The initiative, coined the Snowball Express, allows children, along with their parent, the spouse of a fallen soldier, to head to the magical land in Orlando, Florida for the holidays, for five whole days, all expenses paid. Okay, who has the tissues? 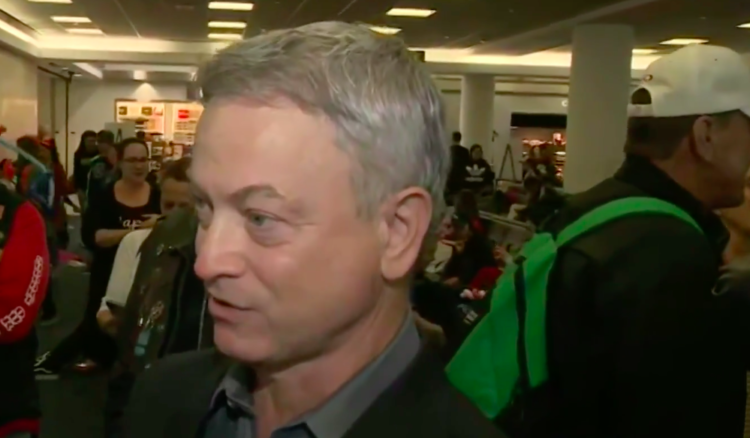 As if that wasn’t enough, everyone who attended the trip was sent off from various airports with their own exciting actions. For example, those who left from Chicago had a crowd of people cheering behind them as they got on the plane, dressed in holiday-themed garb. In Los Angeles, children were even lucky enough to be greeted by Santa and Mrs. Claus themselves via helicopter to take photos with them and receive gifts. And in Nashville, the entire crowd didn’t set foot onto the plane until everyone at the airport the Star-Spangled Banner and a salute from military members.

“Each one of these children who are going on these airplanes have lost a parent in military services—either combat related or illness or unfortunately suicide sometimes,” Sinise said. “We wanna take care of these kids and make sure they know we don’t forget.”

The amazingness doesn’t end there. While in Disney, each child in attendance was able to receive a “we remember” pin at an event where their fallen family members were honored. Additionally, more than 600 flags were displayed to represent each loved one of the people in attendance who were lost in combat. Seriously, where are those tissues?

“The most important thing about [Snowball Express] is that these children don’t feel alone,” Sinise said. “There’s a lot of healing and a lot of bonding and a lot of friendship that goes on that helps them through the rest of the year.”

We can’t think of a more special, memorable way for children who have been through so much to celebrate the holidays with those they love most. Can you?

To learn more about Gary Sinise’s efforts and the Snowball Express, check out the video below.

It’s always so nice when actors use their fame for good! What do you think of Sinise’s extraordinary effort to make a kid’s holiday? What will you do this holiday to make a child’s day?