On a scale of 0 to 10 in terms of being outrageously ridiculous, this story breaks the scale at 100. This wedding tale goes beyond your typical self-centered bridezilla and ventures into Psycholand. You’ve been warned.

A shocked Twitter user who goes by the handle @0lspicykeychain shared screenshots of a profanity-filled rant from a former bride-to-be. They were posted to a Facebook group that shames weddings, and boy does it qualify as shameful.

It starts off with the woman announcing her wedding is canceled and that she and her fiancé have split, but decided to co-parent their son. Then there’s a second announcement that she is also quitting Facebook and going backpacking in South America.

Why? It is all the fault of her family and friends! The post’s writer – later identified as a woman named Susan – wrote that she and her ex first met when they were 14 years old and have been together ever since. They went to community college together, had a child, and eventually finished their degrees.

As the icing on their love story cake, they dreamed of having a fairy tale wedding and managed to save $15,000. But dear readers, that was not nearly enough, because after checking out venues AND consulting a psychic, they realized that the wedding they really wanted would cost $60,000.

And Susan decided her friends, family, and guests should foot the bill by donating $1,500 apiece:

“I SPECIFICALLY, I mean SPECIFICALLY asked for cash gifts. How could we have OUR wedding that WE dream of without proper funding? We’d sacrificed so much and only asked each guest for around $1,500. My maid of honor (who shall not be named) pledged $5,000 along with her planning services. . .

Like, we made it CLEAR. If you couldn’t contribute, you weren’t invited to our exclusive wedding. It’s a once and a lifetime party.”

Already filled with fury, she went on to complain that only eight people RSVP’d and then her maid of honor and the groom’s family reneged their financial offers. So, she did what any reasonable person would do and RESENT the invites to beg for money again – and then set up a GoFundMe page as a backup. It failed too, only raking in $250.

According to her, asking for $1,500 or $1,000 is quite reasonable because it’s a negligible amount. Yup. A chat with the maid of honor/BFF resulted in the friendship dying when said friend suggested she stay within her original budget.

Once the groom suggested they do a cheaper wedding in Las Vegas, she was offended again.

“He wanted those cheap, raggedy, filthy, whore like Vegas weddings. Am I some Hooch piece of f—ing trash, a hooker?”

“My ex left the room and didn’t apologize for his horrid suggestion.” 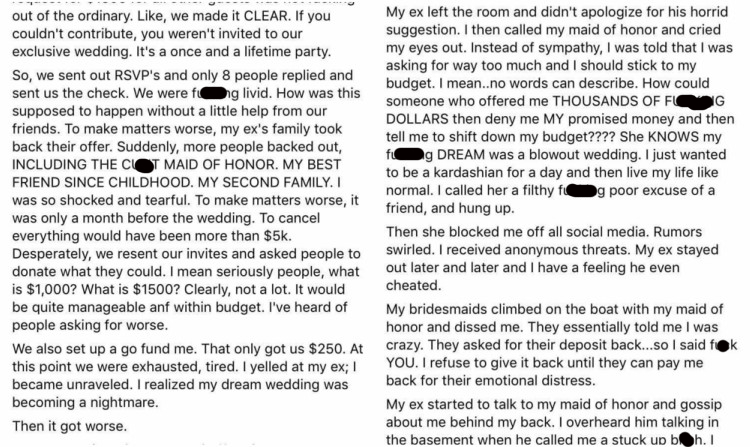 There is a page missing from the rant that cuts off what happened after the ex-groom called her a stuck-up b word. We can speculate that the relationship ended right after that. To read the whole chaotic tantrum, click here.

This is how it ends, but because we love you, we edited some of the more colorful language: 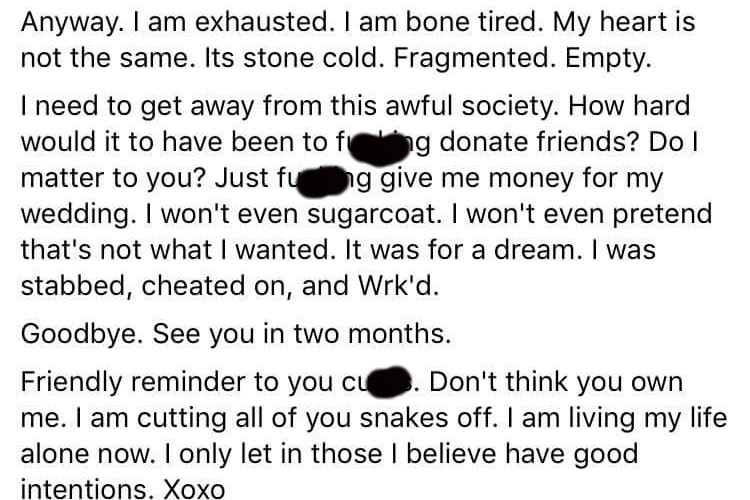 Since the tirade was first posted a few days ago, a cousin of the angry woman has come forward on Reddit/Imgur to verify the post. This person stated that the woman became obsessed with the Kardashians a few years ago and that it contributed to her entitled, delusional behavior about materialism.

It is a good thing no one in the general public knows who she is, because she’s officially become the most hated person on the internet. We can only imagine what it will be like if she ever gets to walk down her $60,000 aisle.

Did you already know about this viral story? What is your reaction? Do you know anyone who’s had similar nerve? Do tell!