These Dogs Are Skilled Escape Artists

Succeeding at a jailbreak is no easy thing. You’ve seen it done in movies and on TV. Houdini was one of the all-time greatest at escapes. When it goes on at your own house, you may not realize what just happened.

Hey, dog owners. How many times did you set up a gate or small fence to keep your dogs contained, but somehow at least one escaped? And not only was the escape successful, but there was no sign of a breakout on the premises? Mmm hmm. I feel you.

You’ll find this video from America’s Funniest Home videos relatable. Wanting to taste freedom at any cost, two dogs attempt to escape their manmade barricade. They’re sly, crafty, and determined. Usually, when there’s more than one dog involved, the others always want to follow suit. Monkey see, monkey do. Or in this case, doggie see, doggie do.

Do not be fooled by their small frames and cute appearances; these two have been planning this out. At first, you see the brown dog jump off of the step stool – a kennel – back onto the floor and behind the table. Did he get cold feet? Was he checking the direction of the winds?

If you’re watching carefully in the lower corner, the other dog is posted up as the lookout. When her comrade refuses to make a move, she does a double take. For just a few seconds, she stands there as if she’s thinking, “Wha. . .? Why didn’t you do it?”

Then the attitude shifts to: “Bump that! I’m going for it!” And she’s off! In three leaps and three seconds, she’s up, on, and over it. Quickly the cautious dog runs up to the bars, worried about being left behind. With no lookout and no support person for guidance, a snap decision has to be made. 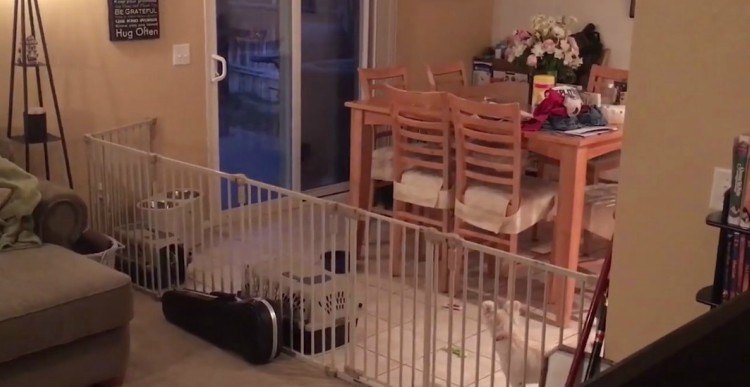 While all of this is going on, the camera is capturing everything these smart pooches are up to. If their escape routine has been something of a mystery, we can understand why a dog parent would want to plant an extra set of eyes. I know a family whose puppy had Houdini-level skills and kept escaping the enclosure while the other puppies whined and watched. They couldn’t figure out how she did it.

Brown pup in the video slowly works up the courage to do something. After a few moments of contemplation, it lets out a tiny bark in a here-goes-nothing tone and hops up onto the kennel. You’ll have to watch the video to the end to see how the little cutie lands. Very elegant.

It’s funny what pets do when they think no one is paying attention. These two partners in crime obviously have a dynamic where there’s a cautious one and a risk taker. Can’t say I blame the cautious one for not wanting to be the one to go first. The little yelp was the extra push that made it happen.

Do you have any experience with clever dog escapes? Were you baffled by their execution? What animal prison breaks have you witnessed? Share with us in the comments!