There’s a reason they have those slip-on socks at shoe stores—it’s so you can protect your feet from any type of bacteria-causing infections when you try on shoes. Vice versa, it’ll also protect the shoe from your feet. It sounds silly, but it’s really no laughing matter.

Case in point: A four-year-old who tried on shoes at a shoe store and a day later fell extremely ill. Coincidence?

Here’s how it went down: UK resident Jodie Thomas was out shopping with her daughter, Sienna, and had her try on some shoes. The little girl slipped her bare feet into the shoes and thought nothing of it—until the next day, when she suddenly had a high temperature and was in severe pain from an infection on her foot.

Her mom rushed her to the hospital, where they informed her that Sienna had sepsis, an immune response to any kind of infection that gets into the blood—from pneumonia to a urinary tract infection or a cut on your skin that gets infected. In fact, trying on shoes that others might’ve had on is one of the most common ways to get sepsis.

Scarily, sepsis can be potentially life threatening, especially for little ones. In fact, sepsis is one of the leading causes of death for children in the US. It’s extremely common, with more than 18 children dying from sepsis each day.

Poor Sienna had to spend five days in the hospital in pain. Thankfully, doctors were able to avoid surgery and were able to drain the pus and clear up the infection. While Sienna is going to be okay, Jodie will never let her try on shoes with her bare feet again. 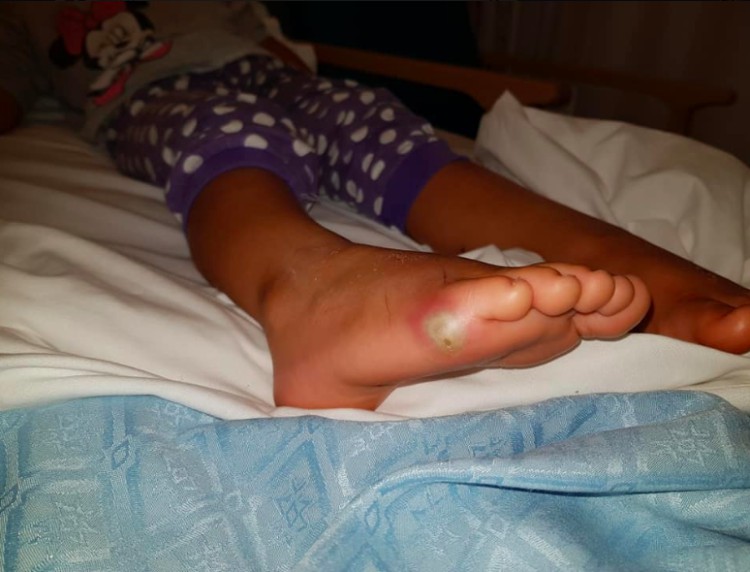 In fact, Jodie posted photos of Sienna’s foot on her Facebook, along with this message to warn other parents not to put their child’s bare feet in shoes that they don’t know where they’ve been:

“For all parents please put socks on you’re children while trying new shoes on. I’m guilty not doing it for mine and myself, but this can be the outcome infection spreading throughout the body. You don’t don’t know whos[e] feet has been in them before hand!! Sienna has had one hell of a outing and thankfully and touch wood made a full recovery! Who would thought trying new shoes on could make som[e]one so ill. So with back to school shopping under way, carry a pair of spare socks!”

Besides being careful about trying on shoes, sepsis can be prevented by keeping cuts, scrapes, and wounds clean, which can prevent infection. Additionally, always follow proper hygiene, such as washing your hands often and bathing regularly.

If you do have an infection, be aware of the warning signs of sepsis—things like fever, chills, rapid heart rate or breathing, rash, or confusion are all symptoms. Visit your health care provider or take your child to the pediatrician the moment any of these symptoms appear.

For more on this story, plus the warning signs of sepsis and how to best prevent it, check out this video below.

Have you ever tried on shoes in a store without socks? Did you know sepsis was such a common medical emergency?