Why Southerners Put This Unexpected Snack in Their Soda

When it comes to endearing food traditions, it’s safe to say that the South is the place to beat! From pecan pie to sweet tea, we just can’t get enough of the region’s delectable fare. And while we love their famous comfort foods, we’ve come to respect the lesser-known ones even more—namely, Coke and peanuts.

Yep, you read that right— Southerners routinely drop handfuls of salty peanuts into ice-cold bottles of Coca-Cola! It’s a bit of a difficult concept for non-Southerners to wrap their heads around, but the food hack has withstood the test of time for a reason: it just tastes THAT good!

How this beverage ritual got started

In an article posted to Coca-Cola’s official site, food historian Rick McDaniel posits that, while not much is written about the roots of this particular tradition, it most likely came about as a result of “country store commerce.”

You see, around the turn of last century, the rural South wasn’t dotted with the many fast food rest stops that it has today. Because of this, both travelers and locals alike were forced to rely on packaged goods that could be found at the predecessor of 7-11: the country store, a place where a patron was usually met with simple treats— like Coke and nuts.

Although it’s impossible to trace back the inventor of this unexpected recipe, McDaniel believes that the phenomenon was likely started in the place where it is still practiced today, the South.

According to a poll conducted by the food historian, drinkers of this sweet and salty treat are almost completely concentrated east of Texas, down to Florida, and all the way up to the Maryland border.

These days, you can still find local folks indulging in this food tradition. A Birmingham gastropub called Ollie Irene has even reinvented the beverage by adding another Southern staple to the mix—Jack Daniels!

In a video posted by popular YouTuber Emmy on her channel emmymadeinjapan, the adventurous foodie lets the world in on what it’s like to try this special drink for the very first time.

Emmy kicks off her review by first explaining that the snack tastes much better when made with Mexican Coke in a glass bottle. Just trust her on this one!

She gulps down some of the sweet drink until she gets past the bottle’s narrow end, then drops in a full packet of dry-roasted, salted peanuts. 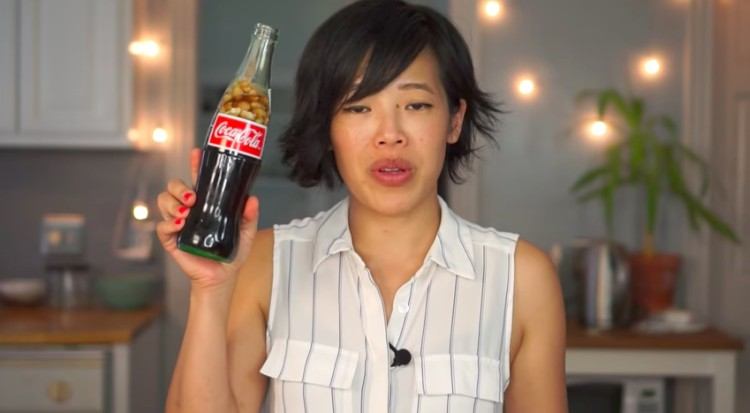 To see Emmy’s take on this historic food tradition, be sure to click on her video below. You’ll hear both her full review on Coca-Cola and peanuts, as well as some tips on how to best gulp the beverage down. We can’t wait to try this out for ourselves!

Now that you know all about Coca-Cola and peanut’s mysterious backstory, we’d love to hear from you. Did you grow up drinking this beverage? If so, where are you from? Do you know of any other interesting Southern food traditions?