IHOP Changed Its Name, and Burger King Trolled the Chain in the Best Way

Just recently, we gave you the scoop on one of the most quizzical pieces of news to have ever made its way out of the restaurant industry–after some 60 years as a reigning breakfast chain, IHOP would be changing its name to IHOb.

Yep, we were confused at first, too, especially considering, initially, the restaurant didn’t release more details about WHY it was changing its name–we just knew that they were changing it. In a mysterious tweet posted to the chain’s Twitter account, it said that the reason behind the seemingly random choice would be revealed on June 11th.

After waiting patiently for a whole week (how rude, IHOP!), we were finally given the scoop on why the breakfast chain felt so compelled to change its name in the first place. According to a spokesperson, they were now to be known as IHOb, or the International House of Burgers.

Yep, that’s one way to get attention.

Predictably, the haters and jokesters of the Internet pretty much took a big, collective dump all over IHOP’s–er, IHOb’s–bizarre bid for publicity. As a matter of fact, the negativity permeated to all reaches of the Internet, so much so that even other large chains felt the urge to weigh in on the weird decision.

How Burger King found the best way to troll IHOP

Ok, ok, we know that we technically have a typo in the above heading (it should be IHOb), but we just can’t get ourselves to actually change that ‘P’ to a ‘b’. We don’t know if our aversion to the name change has something to do with our extreme, deep love for pancakes, or if it’s connected to some deep-seated childhood memory of eating at the restaurant every Sunday during our school years, but what we do know is that the shift feels just, plain WEIRD.

As we mentioned above, Burger King apparently feels just as awkward about the whole shift in the brand, too. As a matter of fact, maybe OFFENDED would be a better word to use than awkward because Burger King seemed to feel that IHOP was stepping out of line for associating themselves with burgers when so many other chains, like themselves, for instance, had the whole “burger thing” down already.

So, Burger King decided to do something really, really petty–and really really funny…

Do you notice anything odd about this photo?

Yep, you don’t have to be a Twitter user to see that Burger King decided to respond to IHOP by changing its Twitter handle to Pancake King. We told you they got petty.

And, if that wasn’t petty enough, Burger King took its public trolling to the next level by responding to queries from its customers with Taylor Swift-inspired lyrics. 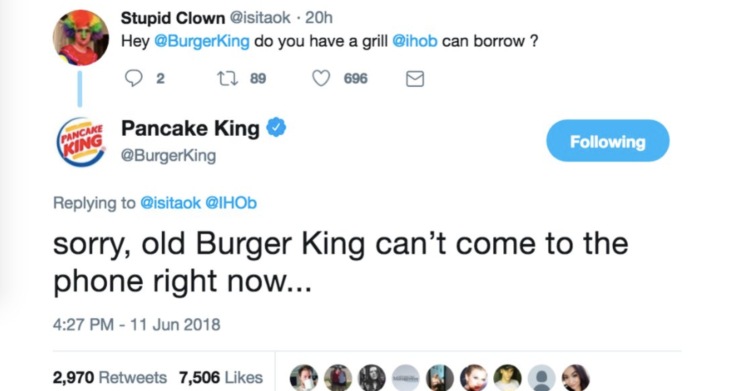 It doesn’t get pettier than that, folks!

Lucky for IHOP–er, IHOb!–Burger King’s stunt was only a short-term thing and the fast food chain switched back its social media handles shortly after their stunt.

Whatever your stance is on the IHOP-Burger King feud, it’s safe to say that these businesses have some very forward-thinking marketing people!

What are your thoughts on Burger King trolling IHOP? Are you surprised that the company did this? Have you tried the new burgers at IHOP?