Tracey Britten is already a mother to three grown-up children—one daughter and two sons—as well as a grandmother to eight children, all between the ages of seven months and 11 years. Needless to say, to an outsider, it might seem like her family is complete.

But at 50 years old, Tracey was separated from her old husband who she had her kids with, and remarried to her new one. She felt like she needed something more in her life—perhaps an even bigger family with her new husband.

When her mother died, she felt that was grounds to start a new life. Her mother had actually always told her in the past that she felt like Tracey would have twins. So as a commemoration to her mother, she used the money that her mother left her when she passed for IVF treatment to help her get pregnant.

And now? Tracey is the oldest mother to ever birth quadruplets. That’s not one, not two, but four babies, if you didn’t know.

Tracey was told that her odds of all four embryos that were implanted in her surviving was a million to one, so it’s pretty much a miracle that she was able to conceive and carry four babies to full term.

“I only wanted one child and was blessed with four,” She said. “It’s a miracle. I didn’t realize we’ve made history. I was told they simply couldn’t pull through at my age.” 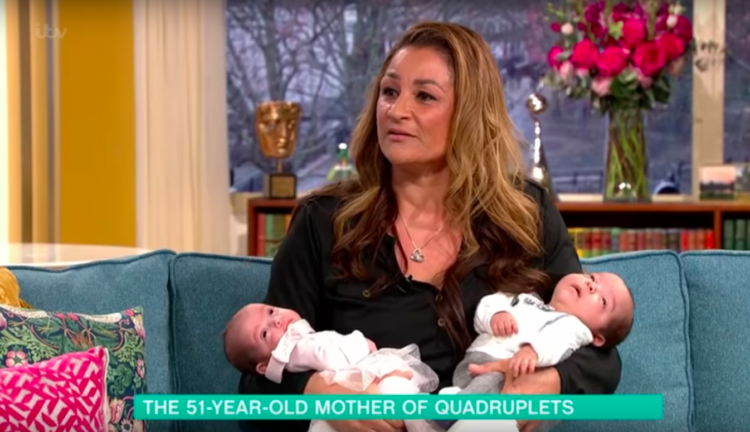 While it sounds like everything went well, Tracey actually didn’t have the most smooth pregnancy. When she was only about 30 weeks, doctors told her that one of her babies was struggling a bit, which could put the other three in danger.

It was determined she’d have to give birth at 30 weeks and was admitted to a hospital where 35 professionals participated in an operation to help deliver the babies. Thankfully, delivery went well and she has four healthy babies!

Tracey couldn’t be happier to be starting a family again—even referring to herself as the “happiest woman alive.” She had her first children very young and being newly married again and more mature, she feels she can devote herself better to her new little ones.

“I’ll cope better now than when I first became a mum in my teens and couldn’t help wondering what else I was missing out on,” she said. “I’ve done everything I want to do now, so I’ll just be able to devote myself to my babies.”

Of course, being 51, the Internet is having a field day lashing out at her, calling her every name in the book—from selfish to gross and everything in between.

But Tracey has a few words for these haters: “No one criticized Mick Jagger, Ronnie Wood or Elton John when they became fathers in their 60s and 70s, so why are they attacking me?” she said.

To hear Tracey’s whole story on her journey to quadruplets in her 50s, check out this interview with Tracey below.

What are your feelings on Tracey becoming a mother of four at age 51? Do you feel his is too old to be a new mom again, or that age is just a number?