Barcelona Opera House Reopens With Performance To An Audience Of Plants

Since the month of March, the global health crisis that is COVID-19 has forced many places of entertainment to close until further notice. As we round out June, that further notice is now. Finally, many places have begun to reopen their doors—though things certainly aren’t all how they used to be.

As you may imagine, many businesses are requiring their customers to wear masks or have their share of social-distance rules in place. But one opera house in Barcelona took a bit of a different approach.

After a three-month lockdown, Spain has finally lifted their stay-at-home ban. And Barcelona’s Liceu opera house was one of the first places of entertainment to reopen. In fact, they even just performed their first concert since the pandemic began. However, the audience wasn’t what you’d expect—and we don’t mean the turnout was low.

Instead of human beings filling the seats, UceLi Quartet performed a show for an opera house full of another live species: plants.

That’s right, the string quartet played Giacomo Puccini’s “Crisantemi” for plants— precisely 2,292 plants, to be exact—that sat among each seat at the venue. While humans were able to live stream the performance, there weren’t any in the live audience.

“After a strange, painful period, the creator, the Liceu’s artistic director, and the curator Blanca de la Torre offer us a different perspective for our return to activity, a perspective that brings us closer to something as essential as our relationship with nature,” states a press release on the Liceu’s website. 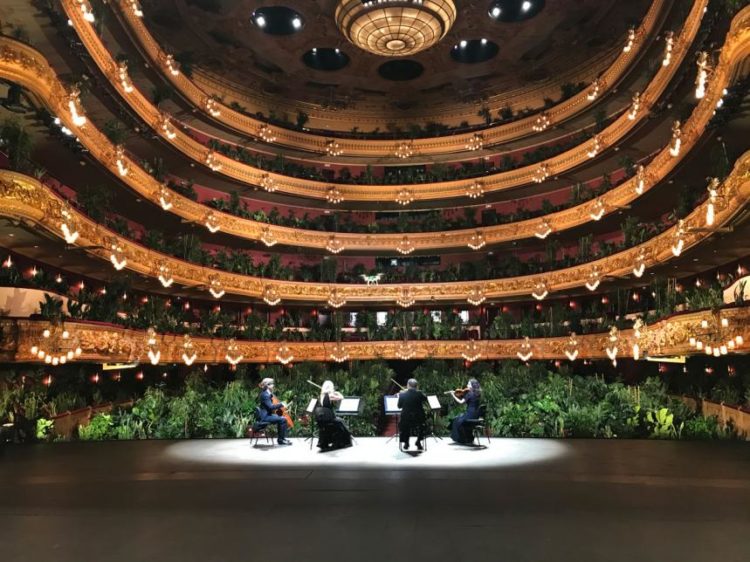 Once the concert was over, the plants were donated with a certificate from the artist to 2,292 healthcare workers at the Hospital Clínic of Barcelona as a thank-you to their service during this unprecedented time.

Even with their lockdown lifted, this opera house wasn’t going to take any chances just yet. However, the venue does have plans to return to business as usual (with real humans in the audience) very soon.

“[The Liceu] welcomes and leads a highly symbolic act that defends the value of art, music, and nature as a letter of introduction to our return to activity,” they stated.

In the meantime, get your fill of the string quartet in the video below, as they play music for their audience of plants.

What do you think of this opera house performing their first show post-pandemic for more than 2,000 plants? How do you think they (and other places of entertainment) will go about shows in the future as a way to keep customers safe and healthy?