Finding out you’re expecting is one of the most exciting times of your life—but it’s also one of the scariest. While most pregnancies end happy and healthy, there are lots of scary things that can happen during the process.

Angela Bakker was so excited when she got pregnant with her first child, a little girl. But when she was 23 weeks, she was diagnosed with intrauterine growth restriction, which is a fancy way of saying she had a defective placenta. That means her little one wasn’t able to be fed in the womb and doctors told her that the baby might not make it.

Shortly after, Bakker developed preeclampsia, a high blood pressure condition some pregnant women get. At this point, there was risk to Bakker herself, and she had the choice of aborting her baby. But she absolutely refused.

“There were four hours left until the abortion cut off,” she said. “But they told us that in cases like ours they make exceptions. They said, ‘The law doesn’t even apply to you. That’s how bad your case is.’ She started kicking, and I thought, that’s her little voice. That’s all she can say.”

At this point, Bakker was forced her to give birth. Naomi Joy Bakker entered the world at just 13 ounces, and before anyone could hold her, she was immediately sent into the NICU. She was alive, but she was teeny tiny and needed all the help she could get.

Most babies this premature don’t make it, but Naomi was a fighter. She was at risk for brain bleeds, cerebral palsy, blindness, deafness and asthma, but the little tyke persevered through every obstacle. 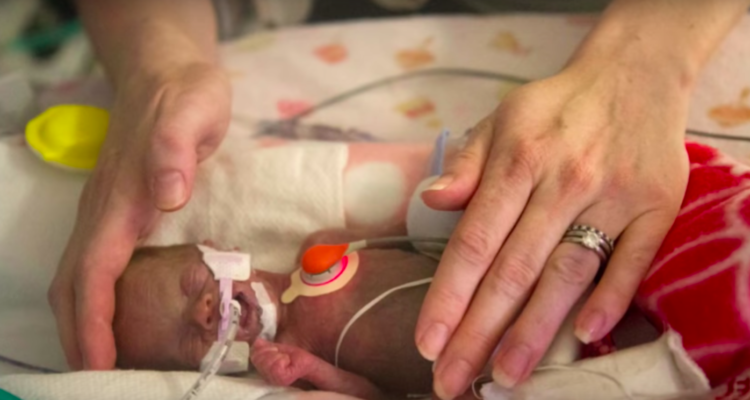 Bakker and her husband weren’t able to hold Naomi for quite some time—she was just much too fragile for humans yet. But as she grew stronger and stronger, they had hope that they’d get to hold their daughter after all. It wasn’t until she was two weeks old that they were finally able to hold her.

During the next few months, the Bakkers watched their daughter fight for her life, and continue to grow healthier. They even got to take part in her care by doing skin-to-skin care, which doctors believe really helped her heal.

And after 142 days in the NICU, little Naomi was discharged. She may have had to wear oxygen and monitors to watch her breathing, but she was getting healthier each day.

“One of the nurses said Naomi’s is the kind of story they dream about, and that’s why they do what they do,” Bakker said.

Bakker hopes her story will encourage parents to always get a second (and perhaps third and fourth opinion) if you’re ever given such a terrible diagnosis.

Naomi is now a healthy little one-year-old girl—and a total miracle. You won’t believe what she looks like now!

To learn more about how Naomi defied the odds and to see how much she’s grown, check out the video below.

Can you believe how small Naomi was when she was born? Did you ever think she’d look like she does now?