Any time something terrible happens to a child, it’s heartbreaking.—whether you’re a parent, or even if you’re not. Unfortunately, there are thousands of abductions that happen all around the world, and many of them are children.

One of the more recent child abduction stories that emerged was about little seven-month-old, Emma Grace Kennedy, who was taken from her mother in her hometown in Virginia on Sunday, June 3.

An Amber Alert was issued for Emma Grace after she was taken, and police went on the hunt for to find out who could’ve taken this little girl. It took more than 24 hours later—which probably felt like a lifetime for the mother—but they’ve found the offender, and it was the baby’s father, Carl Ray Kennedy.

He was quickly arrested in Randleman, North Carolina, by the Danville police, the FBI, the Randolph County sheriff’s office and the U.S. Secret Service, and is now in custody.

Carl Ray, 51, was arrested for the abduction of his young daughter at quick-stop gas station in Danville after he assaulted her mother in the parking lot. Authorities then believe he drove off in that car—the same car he was found in: a gold four-door Suzuki.

“Emma Grace Kennedy appears to be in good health and is being evaluated at a local hospital,” the recent report issue stated. “An Amber Alert was issued for Emma Grace Kennedy, but it has since been canceled.”

While this story has a happy ending and Emma Grace has been found safe and sound, they were initially concerned that she could be in extreme danger. 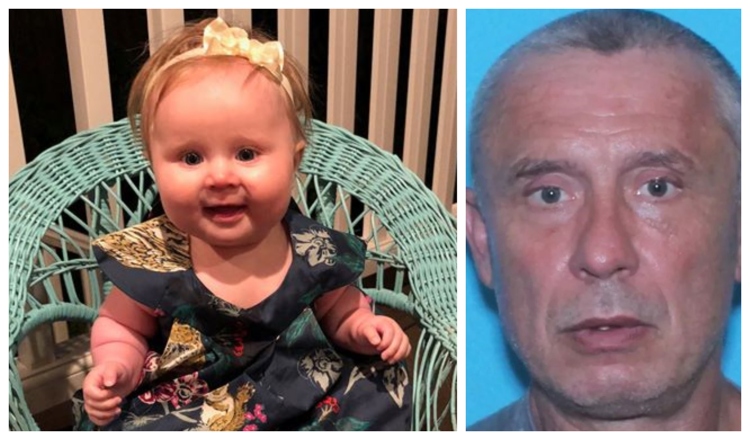 While Carl Ray is the baby’s father, he’s also registered sex offender and is currently out of jail on a $250,000 bond following an arrest on drug distribution charges. Authorities believed that when he was found with her, he was armed with a knife.

They had spotted him not long before they arrested him in the area of Seven Springs, North Carolina in Wayne County, and police believe he may be headed to Oak Island in Brunswick County, more than 100 miles from the Seven Springs area. We’re glad he didn’t make it that far!

Child abduction is no joke, and is more common than we’d like. Around 800,000 children are reported missing each year, according to the National Center for Missing and Exploited Children (NCMEC). That said, the 203,000 of those children are kidnapped by family members, which is just what happened in Emma Grace’s case.

We’re so glad this story has a happy ending, but there was a period of time when no one was sure when Emma Grace would return, or even if she would. This was of course, especially hard on her mother.

Check out this video that was released right when they spotted Carl Ray heading away with his daughter, armed with a knife. You can also hear from her mother, who was having a very hard time and says some devastating words.

Did you follow this story about Emma Grace Kennedy’s abduction? Have you ever witnessed a child abduction before?