Talent shows were definitely one of the highlights of our school experience and for good reason! Seriously, as a kid, what’s more fun than putting together a show with all your friends after school? Plus, you get out of one class for a day to watch kids from your class sing, dance, act, and be goofy — it doesn’t get much better than that.

Well, nothing more clearly shows how much fun school talent shows can be better than these four boys. When it came time to plan a performance to put on for their 5th-grade talent show, these friends knew they had to do something totally hilarious and unexpected.

And, boy, did they nail it.

When the camera starts rolling, the talent show emcees are just introducing the four friends to their classmates, who are all sitting cross-legged in their school’s gymnasium. Then the camera pans quickly to the left and we see something…very unexpected.

There’s a tall length of black fabric in front of the audience. Suddenly, the fabric scurries away to reveal the four boys sitting behind elaborate puppet-like costumes. There’s a few feet of cardboard with a white backdrop and four baby onesies — and four holes where each boy’s head is sticking out above the baby costumes. 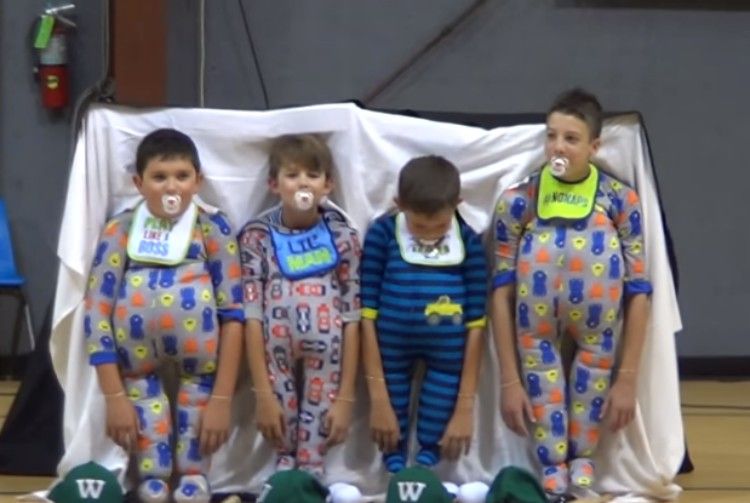 Just looking at their heads above these baby costumes is enough to make us laugh out loud! But then the music comes on and the goofiness truly begins.

The immediately recognizable tune of Taylor Swift’s “Shake it Off” comes on, and the first baby begins to lip-sync the lyrics. We immediately notice that it’s the boy’s hands sticking through the baby onesies and how they move can lift or lower the baby’s “feet.”

So, as they jam out to TSwift, the baby costume is jamming out, too!

All four of the boys are so into the performance; none of them are embarrassed or holding back, and that’s part of what makes this such a hilarious bit! Their classmates definitely feel the same way, you can hear everyone cracking up from the moment the babies are revealed to the second the performance ends.

But don’t think the boys just stuck to lip-syncing this fun pop song — oh, no. The boys continued to act out a medley of songs, complete with choreography and props.

You have to watch the video below to see all the hysterical songs they chose! Watching how much fun they’re having together is guaranteed to put a smile on your face.