Do It On a Dime

Let’s be real: Who doesn’t love a classic French manicure? The white tips and neutral tone of the look goes with pretty much everything. It’s a staple and one of the most requested nail designs salons get to this day.

The only problem is, while getting a manicure can be relaxing, it can also be really time consuming and expensive. Correct us if we’re wrong but ain’t no one got time to spend an afternoon at a salon, let alone wants to cough up the $30+ it costs to get it done.

What if you could give yourself a salon-quality French manicure in 10 minutes flat on a shoestring budget (say, 10 bucks)?

The history of the French manicure

Before we tell you the secret about the inexpensive, time-saving DIY manicure, let’s talk about how the French Manicure even came to be. Like, who thought that painting the tip of your nail white and while keep the rest of the nail clear, cloudy, or pink would look so elegant?

The answer: Jeff Pink, the creator of Orly, who came up with the idea of a French manicure in the 1970s. But he didn’t think of it merely for its chic design.

Pink actually created the French manicure after seeing what a tedious task it was to match each actress’s nail color to each costume change. Since the French manicure goes with pretty much everything, it just clicked in his head as a solid solution to such a time-consuming problem. 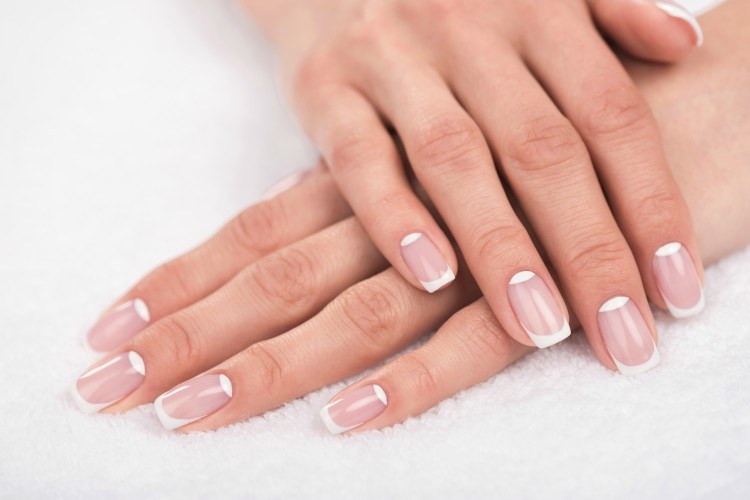 And so the French manicure was born. But it didn’t gain much popularity until Jeff introduced the idea of using French manicures on models on runways in Paris. It was after this when he trademarked the term “French Manicure” in 1976.

Fun fact: Cher was one of the first celebrities to actually started donning the French manicure, and when everyone started to go crazy over it. Yep, Cher is basically the reason why you begged your parents so badly to let you get French tips for prom.

More on the manicure

Manicures in general have been around for thousands of years. The word “manicure” itself comes from the Latin words “manus” and “cura,” which means

“hand” and “care” respectfully. No wonder you get a whole treatment during a manicure: the buffering, trimming, cuticle cutting, and relaxing hand massages!

With it being around so long, there has to be an easier way than trekking to a nail salon every few weeks. And thankfully, there is. Kathryn of Do It On a Dime, a YouTube channel to help us lead beautiful lives on a budget, breaks it down you for you.

The trick? Press-on nails. Now before you shoo the idea away in fear of it being tacky, know that it’s anything but. The finished product truly looks just like something you’d get at a superior nail salon.

For the full tutorial on how to give yourself a 10-minute manicure for only 10 bucks, check out this awesome tutorial below!